Madrid, October 20th 2016.- Farmaindustria’s General Assembly, gathered today in Madrid for an extraordinary session, and appointed  Jesús Acebillo as the new President of the Association for the next two years. Acebillo takes over the Presidency from Antoni Esteve, following the regulations as set by Farmaindustria’s statutes, which require the alternation between companies with national capital, those of American origin and those with European/International origin; the Presidency this time corresponded to the latter. The Assembly was closed by the Spanish Secretary General of Health and Consumers, José Javier Castrodeza.

The Assembly served as well to constitute the new Governing Board and Board Delegates of the Association, bodies which will accompany the President during the next two years. Acebillo, who has gained the trust and support of the association for a third time, invited these governing bodies to face this period with excitement and the total certainty that the pharmaceutical industry has a lot of room in which to grow, but also in the belief that Spain also has a lot to gain within this sector. In this regard, he encouraged theworking from dialogue and collaboration and to reinforce the “social response” of the sector, “putting patients, as we could not have it any other way, at the center of all our activities”.

The new President of Farmaindustria also remarked during his speech that the pharmaceutical industry “represents the kind of sector in which the Spanish economic consolidation should be built, since it fosters scientific knowledge, invigorating biomedical research –both public and private-, creates highly qualified and diverse jobs, leads productivity as an industrial sector, generates notable export figures and, most importantly, is the synonym of innovation”.

Acebillo highlighted that, amongst the great challenges that the sector will face are two of the pillars in which the Association has worked on during recent years: making compatible the sustainability and access to medicines as well as improving the transparency initiative set up this year.

With regards to the former, he remarked that “we should keep on advancing in public financing formulas which make access to innovation possible, as well as continue working on improving the efficiency of the system and also of the medicine, putting the focus of healthcare outcomes first”.

He defined the challenge of transparency within the field of social responsibility and the relationships with healthcare professionals and organizations, highlighting that this initiative will cast away the doubts about the firm commitment of the sector giving support to the generation of knowledge and the education of healthcare professionals in Spain. He especially appealed to the dialogue so to advance and bring solutions to the healthcare system and, most of all, to patients, using as an example, the elaboration of the Plan of Adherence to Treatments, which will see the light in the coming weeks, and which has contributed to “tightening the collaboration bonds of the pharmaceutical industry with healthcare professionals and organizations”. 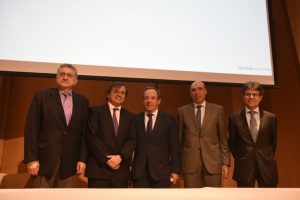 The new President of Farmaindustria praised the work undertaken by his predecessor, Antoni Esteve, during the recent years leading the Association. “During this period, Farmaindustria has worked intensively to reinforce their relationships with the sectors’ stakeholders, and has taken giant leaps, andit has done so whilst being faithful to its values: sustainability, access and innovation”, he concluded.

Esteve, during his farewell speech, reflected on his experience during his term, marked by several milestones: from the Protocol of collaboration signed with the Government and the execution of the transparency initiative, to the recuperation of its R&D investment capacity, the amendment of the Spanish Guarantees Law which has facilitated the equal treatment of original and generic medicines when they are priced the same, the set up alongside generics’ manufacturers, wholesalers and pharmacies of the Spanish Medicines Verification System and the afore mentioned production of the Plan of Adherence to treatments, amongst others.

“I trust in a future that is based on what has been undertaken in the recent past”, Esteve stated, who also spoke of his gratitude for the trust received from companies during his term in office and encouraged the continuation of working from internal cohesion and dialogue with the healthcare system and society.