Code of Good Practice for the Pharmaceutical Industry > Employment

The pharmaceutical industry generates 200,000 jobs in Spain, of which 37,000 are direct positions

12:11 Farmaindustria
Research, talent, transparency and collaboration are the key elements of the sector
02.03.2017 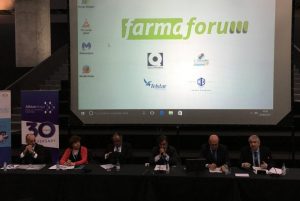 The pharmaceutical industry is one of the key sectors in the Spanish economy, both because of its innovative character and its R&D investment capacity (more than €1,000M a year), as well as for the employment that it is capable of creating.  According to the figures released by Farmaindustria during the opening ceremony of Farmaforum 2017, the pharmaceutical industry generates around 200,000 jobs in Spain, of which 37,000 are direct positions.

Additionally, it is worth mentioning that 96% of employees in the pharmaceutical industry are hired through permanent contracts and that the collective constitute, as well a perfect example of equality, since almost 50% of them are women, as remarked by Farmaindustria’s Technical Affairs Director, Emili Esteve, during his intervention during said ceremony.

“In addition, our bet on talent, which is the maximum human asset, is the best guarantee that we will not stop innovating and generating knowledge, neither now nor in the future”, he added. A good example is the 4,200 professionals working for the pharmaceutical industry who do so in the field of research and development, accounting for more than 11% in this strategic discipline.

In line with this, the generation of new scientific and medical knowledge is one of the priorities for the pharmaceutical industry operating in Spain, which in 2015 devoted a total of €1,004M to this chapter. “Forty percent of these funds were allocated to collaboration projects with hospitals, academia and other excellence centers, creating a more competitive and open kind of research,” Esteve explained.

One of the keys to this model is the BEST Project, pursuing excellence in clinical research of new medicines promoted by Farmaindustria which, for more than 10 years has been promoting the Spanish participation in clinical research projects, and which already counts for the contribution of 45 pharmaceutical companies, 50 hospitals, 13 Autonomous Regions and 3 independent clinical research groups.

“All of these elements make the pharmaceutical sector a driver of Spanish economy, an avant-garde sector which, within a reasonable framework of activity, can greatly contribute to the much needed transformation of a Spanish productive model,” stated Farmaindustria’s Technical Affairs Director, which added another example of the relevant economic footprint of the pharmaceutical sector: “annual exports of medicines in Spain reach a total of €11,000M, a record figure for our industry, which makes us the fifth exporting sector in our country.”

Transparency: achievement of the Code of Good Practices

Transparency is another key element in the sector. In this regard, Esteve highlighted that next year will be one of the crucial periods since the R&D based pharmaceutical industry kick-started its Code of Good Practices in 2002. The new version of The Code, approved last year, goes far beyond the objective of making transparent the relations of pharmaceutical companies with healthcare professionals and healthcare organizations, since it obliges to totally individualize all collaborations made from January 1st 2017.

“This initiative, fostered by the European Federation of Pharmaceutical Manufacturers and Associations (EFPIA) and which probably does not have a precedent in any other industrial remit, proves that this sector is adapting to the current times and its requirements, demonstrating that this is one of the most committed sectors with its environment and activity,” he added.

On the other hand, Farmaindustria’s representative reminded that the R&D based pharmaceutical industry continuously works based on a clear commitment of collaboration with Public Administrations and the Spanish National Healthcare System, of which it deems itself an essential partner. “For these reasons, our work does not end with researching and developing innovative medicines, but it also includes guaranteeing that those medicines reach those who need them.  This need to balance the sustainability of the system with guarantees of access to innovative medicines was fixed at the end of 2015 with the Protocol signed with the Government, through the Ministries of Finance and Healthcare, which was renewed last year through a new Agreement”, he added.

Lastly, the representative specified the challenges currently faced by the R&D based pharmaceutical industry in Spain: implementing the obligations established by the EY to reinforce medicines’ guarantees through a new Spanish Medicines Verification System (SEVeM), while facing the funding of innovation.

Code of Good Practice for the Pharmaceutical Industry, Employment, Research and development