Madrid, February 11th 2015.– The average price per standard unit of medicine in Spain was 15% lower than the average of the Euro zone countries in 2013. Thus, Spain appears in the one of the lower positions of the European raking, only above Slovakia, Portugal, Estonia and Latvia; reflected in Farmaindustria’s Spanish Pharmaceutical Market Monthly Economic Bulletin #115. 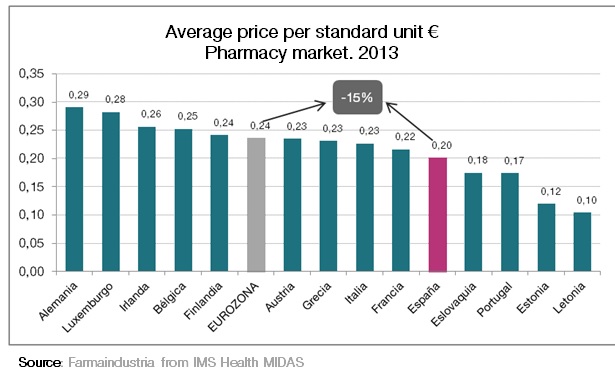 The analysis, carried out with IMS information, also highlights that Spain holds the penultimate position between European countries with regards to the average annual consumption of medicines in per capita terms of standard units; the ultimate position is held by Italy.

These figures clearly demonstrate that the adjustments made in the Spanish pharmaceutical market through the different regulations implemented during recent years, has notably affected the relative position of Spain in the international arena, both in terms of price and per capita consumption.

Namely, medicine prices in Spain are subject to a strict regulatory control which is the main cause for this situation. Price regulation affects both those medicines that are still under a patent protection, and those whose protection period granted by industrial property rights has expired. For the latter, price controls are executed by the Homogenous Group system and the Reference Price System.

Also according to the information included in the Bulletin, the generic-priced market in Spain represents almost 80% of the prescription medicines market in Spain, and 47.5% of said market in value, with a strong growth performance in recent years.

Per capita pharmaceutical expenditure in Spain, 23% lower that the Eurozone’s 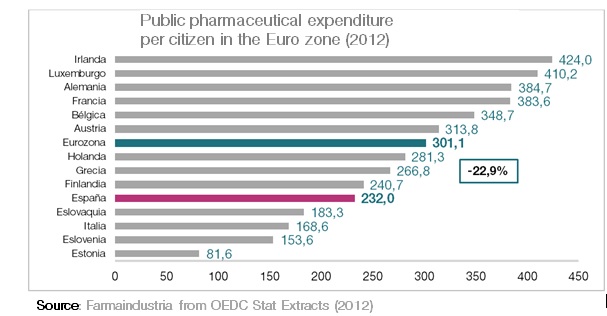 All signals indicate that, whenever 2013 OEDC data becomes available, the difference between Spain and the Euro zone will have become wider, especially considering the 6% drop that public pharmaceutical expenditure experienced in Spain that year was much higher than those values registered in the rest of the neighboring countries.