17:19 Farmaindustria
The 37 units specialized in this field in Spain have undertaken almost 1,800 clinical trials over the last six years
27.10.2015

Valencia, October 27th 2015.- Clinical research in its early stages relates to clinical trials  of drug development in its initial steps. Its importance is high, given that it allows patients to access innovative treatments and researchers the chance to gain experience in the development of medicines. It is remarkable that we are experiencing a growing trend of this activity in our country -reflected in the Guide of Clinical Research Units in Early Stages, presented by Farmaindustria in Valencia today-  a public event that brought together more than 200 representatives from the public and private sectors in biomedical research.

According to this document, which constitutes the third updated and extended edition of the Guide (originally released in 2007), clinical trials in early stages with data available up until December 2014, makes up almost 50% of the clinical research developed by the pharmaceutical industry in Spain; whereas ten years ago the percentage reached only 37% when the BEST project started, which also serves as the source for the data. 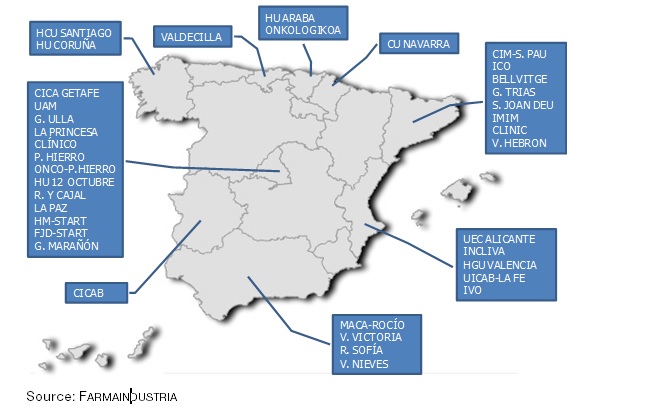 There are currently 37 units for early stage research in Spain and are distributed over nine Autonomous Regions (please see chart), accumulating 1,744 clinical research trials over the last six years between 2009 and 2014; according to the information from the units themselves which is included in the Guide. The efforts undertaken by the public sector professionalizing their units, as well as by the private sector for attracting more investments in the early stages of research to Spain are beginning to bear fruit, as can be observed in the evolution trend derived from this data.

The Guide includes several of these early stage research units specialising in oncology, a logical choice due to the fact that almost 50% of clinical trials initiated by the pharmaceutical industry in 2014 tackled this therapeutic area.

The document is designed around two main sections. The first one offers a global vision on the early stages units included in the Guide, whereas the second describes in detail the traits and capacities of each unit.

The Guide to Clinical Research Units in Early Stages in Spain, published by Farmaindustria, intends to serve as a tool to continue fostering clinical research in early stages in our country. The Guide aims to be as user friendly as possible, and it is available in Spanish and English at the Spanish Technology Platform for Innovative Medicines (www.medicamentos-innovadores.org) website, as well as on Farmaindustria’s website (www.farmaindustria.es).

This initiative, presented today, is a great display of the Pharmaceutical industry’s conviction for clinical research, for patients and the Spanish society as a whole. A challenge the sector develops in a coordinated manner with hospitals, research centers, healthcare professionals and public administrations.