Madrid, April 14th 2015.– The market of prescription medicines (basically comprised by branded medicines, with or without patent protection) dropped in Spain by 1.4% in 2014, while sales of generic medicines in the same period experienced a growth of 9.5%; this is reflected in Farmaindustria’s Monthly Economic Bulletin nº 118. 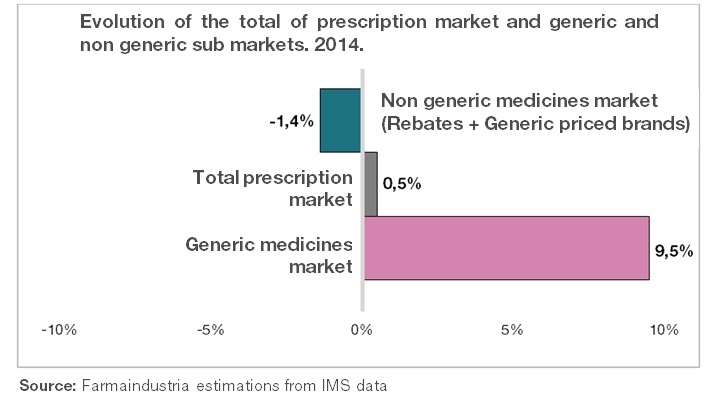 The figures demonstrate the duality in which the Spanish pharmaceutical market in immersed, both in the public and private environments, with important growth as far as the sales of generics medicines is concerned, and strong reductions in the sales of medicines still under patent protection. This situation, which has lead the general trend during the last year won’t be experiencing significant changes in 2015, as it has already been foreseen by the main analysts of the sector.

As reflected in the Bulletin, the generic priced market represents almost 80% of the prescription market in Spain (78.3%) and 47.9% of said market in values, experiencing a steep growth during recent years. Only two years before, in 2012, the market share of generic priced medicines was 67.1% in units and 39.6% in values, which implies a growth of the market share of these medicines of 17% in units and 21% in values in a two years period.

On the other hand, the Bulletin analyzes the regional pharmaceutical market during the last term, stating the great dispersion of per capita public pharmaceutical expenditure in Spain, which ranges from 268€ per citizen in Extremadura to 163 in the Balearic Islands, not taking into account the autonomous cities of Ceuta and Melilla. This dispersion has been reduced in Spain during the last year, considering the variation coefficient has passed from 13.2% in 2013 to 12.7% in 2014.

According to available data, one of the most important variables which causes the great differences between Spanish regions, both in terms of public pharmaceutical expenditure per capita as in terms of prescriptions consumption per capita is the diverse degree of ageing of its population.