14:33 Farmaindustria
Publication of issue #112 of the Spanish pharmaceutical market in Spain’s Monthly Bulletin
17.10.2014

Madrid, October 14th 2014.– All industrial sectors in Spain have experienced decreases in their production levels during the economic crisis, with the exception of the pharmaceutical industry and, marginally, the food industry. This is one of the main conclusions reached and included in issue #112 of Spain’s Monthly Bulletin, elaborated by FARMAINDUSTRIA. Specifically, the pharmaceutical sector has experienced a total increase of 11% in the period between late 2008 – to date. Therefore, the pharmaceutical industry stands as an exception within the whole of the Spanish industry, where traditionally, the more important sectors have seen their production diminish by more than 30% since the beginning of the crisis. 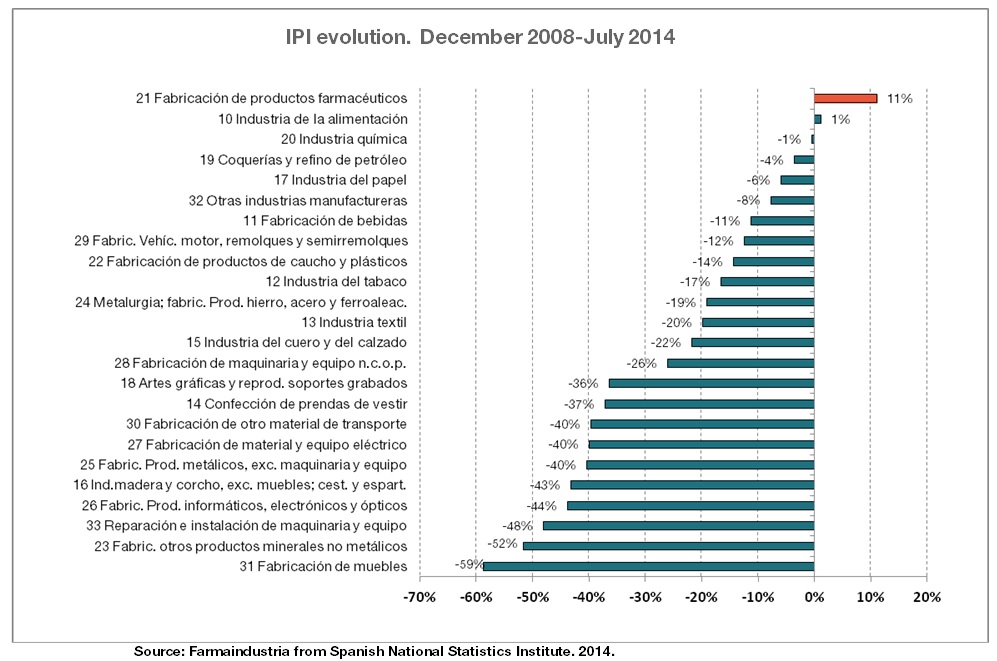 The Bulletin also makes it clear that the Industrial Production Index constitutes an important indicator to understand the economic cycle in the short-term, and therefore being able to anticipate possible changes in trends affecting a country’s economy. This index measures the evolution of the productive activity of critical sectors, both for the national economy and for external markets. By taking into account this parameter, one can quantify the magnitude of the crisis that the Spanish industry has been experiencing in recent years.

Even though the pharmaceutical industry’s production has grown the most out of all industrial sectors during 2008-2014, the truth is that, during the two past years this figure has not been so positive. Even though it has increased by 1%, it is far from standing out from the other industrial sectors and still holds an intermediate position as far as production increase is concerned.

According to the Bulletin, this recent relative worsening of industrial production in the pharmaceutical industry should be regarded in the context of a public national market in pharmacies, where they have registered a drop of around 30% during the last four years. Even though this drop has been compensated with high performance in exports at the beginning of the crisis, these exports have slowed down notably since 2012, which would explain the worsening of the Industrial Production index.

If the Spanish market does not get back onto a growth path -the Bulletin concludes- the pharmaceutical production would lose the dynamism which it has always been characterized for in this economic sector; leader in R&D investments of the Spanish industry.

140 million€ as savings stemming from the new Reference Price Order.

On the other hand, the Bulletin analyzes the impact of the new reference price system which came into force on July 15th, however its saving effects will not be accounted for till September 1st.

According to Farmaindustria’s calculations, the new Reference Price Order will have an annualized impact (up to September 2015) of 140 €M in savings of pharmaceutical expenditure in pharmacies. Thus, the effective savings that the Spanish NHS will accumulate during the last four months of 2014 will exceed 45 M €.

These 140 M€ would have to be added to the 420M€ that the System of Homogenous Groups (AAHH in its Spanish acronyms) has generated for the Spanish NHS during the last two years. It is worth highlighting that the reduction of prices of all products included in these AAHH is almost automatic once a new generic comes into the market, or a price reduction of products already included in one of these groups. Therefore, savings coming from the off patent segment of the market are produced in a continuous manner (monthly and affecting all products in each group).

That is to say, in order to estimate savings made on expenditure due to economic regulations in the off patent segment for those products dispensed in pharmacies, it would be necessary to work out both savings generated by the new reference price order and also the one generated continuously by the mechanics of AAHH.

Thus, in accumulated terms, the reduction of pharmaceutical expenditure attained in the last two years through price reductions would exceed 670M€, as a consequence of the permanent update of product prices included in the AAHH (420€M), specific price reductions on off- patent products (250€M), and future annual savings of 140€M generated by the reference price order, plus an additional 170€M coming from price reductions affecting patented products, whose effects on the expenditure volume are permanent.