Madrid, June 16th 2015.- Forecasts reveal growth of between 0.4% and 1% annually in the Spanish pharmacy market for the period between 2015-2019, according to IMS’ Market Prognosis report which is featured in issue 120 of Farmaindustria’s Monthly Economic Bulletin. These figures are far from the general growth figures which have been forecast by diverse national and international organisms for the Spanish economy,  for the next five years.

After several years of intense falls in the market, as well as in Spanish public pharmaceutical expenditure, 2014 saw the first signs of positive growth (although moderate)  during the last five-years period. However, forecasts are not very optimistic with regards to the evolution of these parameters in the short and medium term. If the forecasts were to become a reality, we would enter the 2020 decade with an expenditure volume which would hardly exceed 9,700 M€, which would imply being positioned at similar levels to those of 2005, in current terms.

The Bulletin highlights that both real data and analysts’ forecasts show that, once the statistical short term effects of the healthcare policy measures applied in Spain since 2010 have been absorbed, the change of trend of pharmaceutical expenditure towards stagnation will become a reality. For this reason, it is not feasible to foresee an expenditure evolution scenario which would get even close to the growth rates of the Spanish economy during the next few years.

On the other hand, the Bulletin compiles the figures of the Spanish National Institute of Statistics about Gross Added Value (GAV) with regards to the pharmaceutical industry. In this case, the decrease of the sector’s GAV in Spain has been sharp, coming from contributing to Spanish GDP with almost 7,000 M€ in 2008, to 5,000 M€ in 2013, even though the gross salaries of employees was maintained. 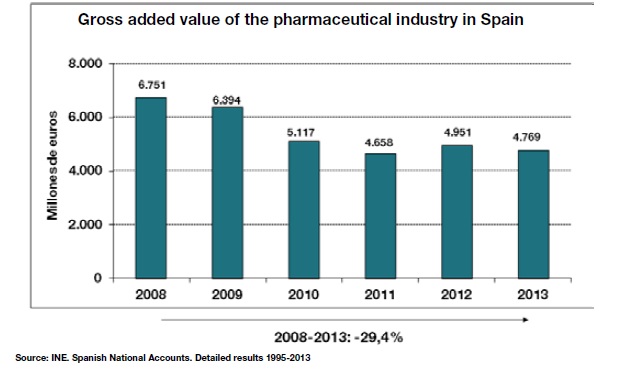 In fact, from an income’s point of view, the GAV is distributed, fundamentally, between gross salaries, taxes linked to production and the gross surplus of exploitation and mixed revenues. In this case, the reduction of the pharmaceutical industry’s GAV registered in the period between 2008 and 2013 had concentrated in the exploitation gross surplus, but not in salaries or in taxes linked to production.

The Bulletin points out that this decline of the pharmaceutical industry’s GAV is tightly linked to the impact the regulatory measures have had on the sector since they were implemented in Spain in 2010 with the aim of reducing public deficit.

The percentage that GAV represents on the value of the Spanish pharmaceutical production has been reduced significantly;  from 46.3% in 2008 to 32.9% in 2013. This attrition of almost 30% is the highest experimented by an industrial sector during the crisis, which accounts for a a good measuring stick of the impact that regulatory measures have had on such an important item for the sector as it is the share of its production, which is directly translated in GAV.