Spain, above the European average in clinical trials in oncology

11:47 Farmaindustria
The excellence of the professionals, the quality of the National Health System, the commitment of the industry and the new legal framework, facilitate the clinical research against cancer in Spain

The improvement of the medicines ensures that the healthcare cost of the cancer treatment remains stable despite the increase in the incidence rates
03.02.2017

Madrid, February 2, 2016 – Having prestigious and highly qualified health professionals, a National Health System that is among the best in the world for its quality and infrastructures, a pharmaceutical industry committed to research and a framework Legal system that facilitates these activities, especially since the approval of the new Royal Decree of Clinical Trials, have made Spain one of the European countries with better conditions for the investigation of new medicines against cancer, a disease in which World Day is celebrating the fight against on February 4th.

In fact, 37% of the clinical trials carried out in Spain, including those promoted at the beginning of the pharmaceutical industry and those promoted by public entities, are carried out in the field of oncology, compared to the European average of 24%, according to data from the European Registry of Clinical Trials (EudraPharm) for 2015. But in addition, the research and development of new anti-tumour drugs, whose trials are the most complex, form a very important part of the research efforts that lead to the innovation of the pharmaceutical industry.

Specifically, 50% of clinical trials carried out in Spain by the innovative pharmaceutical industry in 2015 (in the absence of knowing the definitive data of 2016) in collaboration with hospitals and research centres have been developed in the field of oncology, according to the latest data from Project BEST, a platform of excellence in clinical research for medicinal products in Spain, driven by the industry, which includes 45 laboratories, 58 hospitals and three independent research groups. 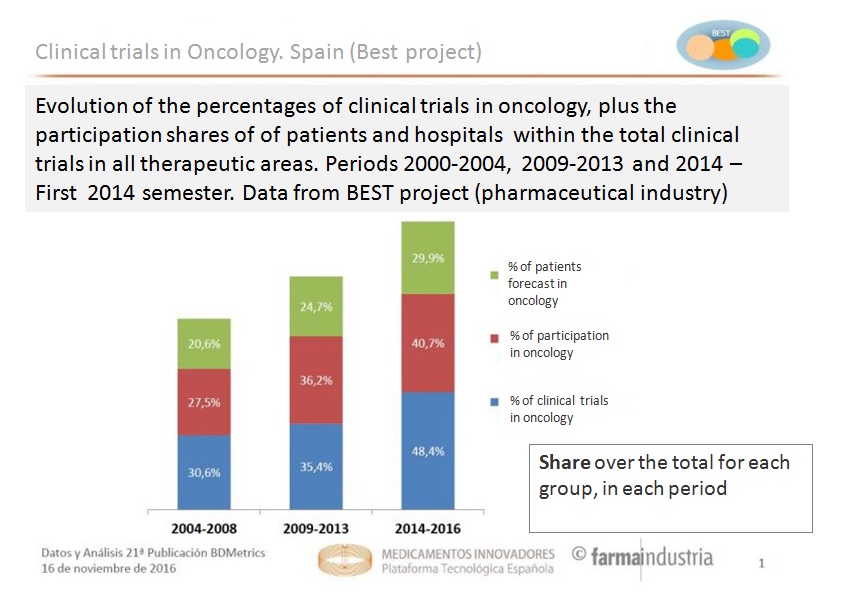 In the context of increasing incidences of cancer, clinical trials of new anti-tumour drugs have been gaining importance in the last decade over other therapeutic areas. Thus, the presence of this type of research compared to that developed around other pathologies has grown almost 20% in the last decade, from representing 30.6% of all clinical trials in the period 2004-2008 to 35.4% in 2009-2013, and finally reaching 50% of the total in 2015.

Similarly, in recent years there has also been increased interest in health centres for participating in these trials, according to Project BEST. Thus, whereas in 2004-2008 only 27.5% of hospital units in clinical trials corresponded to oncology, between 2014 and the first half of 2016, the percentage of clinic research centres participating in new anti-tumour trials was already 40.7%.

All these factors allow Spain, along with Germany, Belgium, France, Hungary and Italy, to be among the six, least time-consuming countries to start a clinical trial in oncology, with only 139 days from the time the documentation is submitted until the start of the process, according to data from the first half of 2016.

On the other hand, despite the fact that the incidence of cancer continues to grow (in 2015, 247,771 new cases were registered in Spain, one thousand more than the forecast for 2020, according to the latest data from the Spanish Society of Medical Oncology), the funds aimed at combatting this disease have remained relatively stable for two decades.

Thus, despite the fact that the incidence of cancer in Europe is responsible for one out of every four deaths, the treatment of the disease has not, on average in the last 20 years, exceeded 6% of the continent’s total healthcare expenditure, according to a report by the Swedish Institute of Health Economics (IHE) conducted in 2016.

The authors of the report conclude that the main reason that this side of healthcare expenditure has remained stable over the years, despite the marked increase in the incidence of cancer, is due to the development of new anti-tumour drugs, which now have fewer side effects and less need for oral administration.  This has allowed many patients, who were previously treated in the hospital, to be able to follow their treatment as an outpatient.

In addition, the cost of anti-tumour drugs forms only 23% of the cost of the cancer treatment in European countries (data from 2014), according to the report, a percentage that four years earlier was less, at 20%. The authors argue that this relative increase responds more to the moderation of growth or even the decrease in other areas of expenditure linked to cancer, such as the reduction of hospitalization time.

Following this trend, and in terms of spending on innovative drugs against cancer in Spain, the expenditure bill has remained stable from 2009 up to the present day, despite the increase in cancer incidences recorded over these years, always assuming around 10% of total pharmaceutical expenditure (including hospitals and pharmacies), despite the fact that 33 new anti-tumour drugs have been added to the therapeutic repertoire in the last four years, according to FARMAINDUSTRIA.

On the other hand, new anti-tumour drugs, which are becoming increasingly more accurate and carrying fewer side effects, have played a leading role, along with other factors such as advances in surgery and radiotherapy, or early detection efforts, in achieving better survival rates in the last decades.

In fact, according to the latest estimates (2000-2007), the relative survival of cancer patients in Spain is similar to that of the rest of the surrounding countries, standing at 53% at 5 years, a fact that shows a rising with respect to the times before.  Between 1995-1999, the percentage stood at 49% at five years, similar to the European rate, and in the period 1990-1994 at 45% (European data), according to the estimations of the Eurocare database.